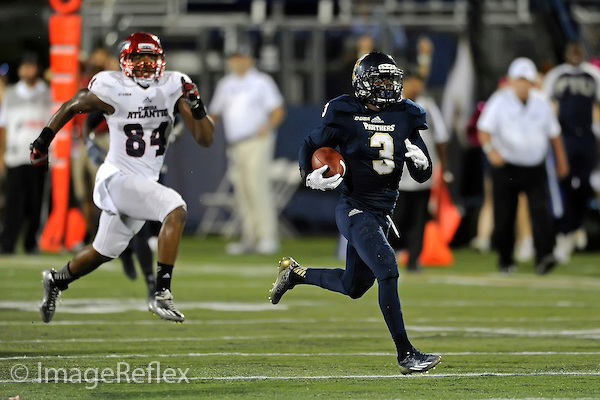 Looking for 2016 Florida Atlantic Owls predictions? FAU doesn’t have much to build off of after their abysmal 2015 season. The good news with that? They don’t have any sort of expectations to live up to heading into this season. The Owls will look to get hope to right the ship and get themselves out of the cellar of C-USA.

Under Charlie Partridge, the Owls have gone back to back seasons with 3-9 records. The Owls will look to change their ways with a new offensive style that has some potential here as they try to gain bowl eligibility by doubling their win total.

Trickett brings in this style he used so successfully at Samford, where the offense not only run and guns, but they have plenty of empty sets and will continue to keep the foot on the gas despite the down and distance.

Florida Atlantic hasn’t had anything like this in the history of their program. It not only has been successful when Trickett runs it, but it also brings change and optimism to the players’ minds.

Florida Atlantic does return their compliment of running backs and brings new some new faces to add to the bunch.

Florida Atlantic returns Buddy Howell and Jay Warren, who combined for 1871 yards over the past two seasons. The duo has gotten plenty of game action and with that experience, they could really do some damage here.

Along side these two, Devin Singletary, who switched his commitment from Illinois to FAU could be a factor here in 2016. They have the options and plenty of talent to help this offense out.

While the new offensive style is implemented for the Owls, who is running it still remains to be seen.

This kind of offense is unfortunately not the one where you want to test QBs either. For FAU though, they must find a consistent choice. They’ll have sophomore Jason Driskel and freshman Daniel Parr to choose from.

It’s already been said the battle would carry into the fall. Given that, the offense may not succeed early on until one of the QBs finds enough playing time to get into the groove.

The Owls have a legit shot this season to find themselves in postseason play.

They really set themselves up for this season with their youth movement over the past couple of seasons.

However, a giant key this season will be what the Owls figure out at the QB position. With a pair of QBs who have little experience, adapting to this new system will be tough. They can rely on the defense some as they have set themselves up to have a lot of talent there.

Winning games against Ball State and Southern Illinois in non conference play is a must too. Grabbing those two wins can put them in an early position to secure a bowl berth.

What do you think about our 2016 Florida Atlantic Owls predictions? Please leave us a comment below telling us how you think they’ll do in 2016!