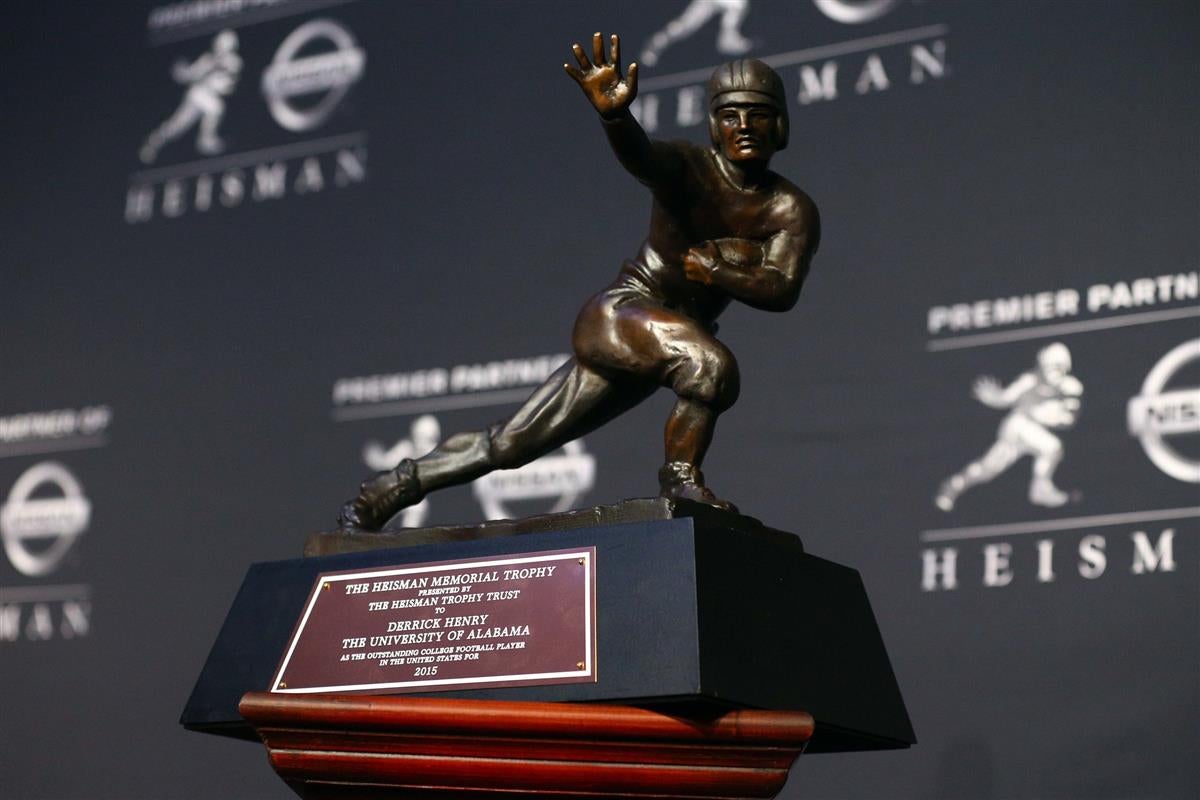 Looking for 2020 Heisman Trophy Predictions and updated NCAA football betting odds & futures? The Heisman is an interesting award.  It is a high profile accomplishment but there have been so many winners who were not even close to the frontrunners when the season began.

The thing we do know is that more often than not it will go to a quarterback and even though there are occasional whispers of a defensive player being considered, they do not often get very close.

The players are usually from Power Conferences too so even though it is exciting for a quarterback from Hawaii or a dual-threat from Houston to get some pub, those are generally not worth putting your money down.

The odds don’t lie, Lawrence is the second most likely winner of the award this season.

However, the numbers are really close between him and Fields below and given that team performance is also a factor in these things I think he gets a bump with Clemson expected to be one of the best teams in America.

Odds are Clemson can have an undefeated season in the ACC, again, and Lawrence stay healthy and puts up better numbers than a year ago.  That can certainly get him to New York where the payoff is a little better.

Off a loss in the title game, the hype machine on Lawrence might be a little less intense which could help.

In addition to Heiman talk there is going to be a lot of talk about whether Fields or Lawrence is the better NFL prospect.  Personally I think Fields might be because he is more mobile but certainly can sling it.

That mobility does lead me to think there is more risk of injury for Fields and even though his numbers will be good there might be some blowouts against lesser competition where they are not as gaudy.

I do like that he can score himself in addition to through his teammates.  That helps a lot.

It is an interesting thought to back Fields and Lawrence against the field, if you are into hedging your bets.

This is my top value pick.  I think the only thing holding Hubbard back is his team’s performance.  If Oklahoma State is at least the second-best team in the Big 12 and he matches last year’s 2000+ yards on the ground with 21 TDs it is going to be hard to keep him from New York.

2015 was the last time a running back won the award, Derrick Henry.  Maybe the circumstances have running the football ahead of passing this season.

Last year at this time he was supposed to be a depth player but once the starter got hurt he didn’t look back.  He set a single-game passing record with 515 yards and had the 9th most yards in a season ever for USC.  All that as a freshman too.

With more reps and the position now his to command you can expect another huge season for Slovis.

Also not to be overlooked is how USC can be a star-making machine.  The team could be better than it has been in a while and command attention from coast to coast.

Howell is the on field leader for the renaissance down in Chapel Hill.  Similar to Slovis, he was a frosh last season but the job was all his from the beginning and he had a monster season, including nearly knocking off Clemson.

If he can repeat it and the Tar Heels get Clemson the the ACC Championship game that is going to be a hard combo to beat.

No North Carolina school has ever had a Heisman winner though.  No bias, just numbers.

LSU was awesome last season.  Joe Burrow was in total command at the controls and was surrounded by a lot of talent.  Brennan gets his shot this season but things are going to be different.

The team should still be really good but they are not going to be as dominant.  If he can keep them winning it will get a lot of attention.

The wins are going to be the thing for Brennan this season.  Only three times in the award’s history has it been won by the same school in back to back seasons.

This is similar to Brennan but might be the better way to go.  Yes, Alabama lost its usual haul to the NFL but was not as gutted on offense as LSU.  The system is still in place and Jones got some run last season when Tua was hurt.  If he can keep the team winning he has to get consideration.

No Alabama QB has ever won the Heisman though.  Jones has a shot but does not seem to have the profile to break that ceiling.

The quarterbacks at the top of the list deserve a lot of attention.  They are proven commodities on elite teams.  Hubbard is a dynamic star who has a higher mountain to climb but is capable of doing so.

I think all he needs is to maintain production and have Oklahoma State at least make the Big 12 title game.  They have to be relevant.

When you look at the payoff that comes with Hubbard, a little QB fatigue and all the other circumstances, I think that pick makes a lot of sense.

If you’re looking for more blog posts like our 2020 Heisman Trophy Predictions we’ll be providing 4* free College football game predictions on the blog all season long, and check out our Experts for guaranteed premium & free CFB Football picks!