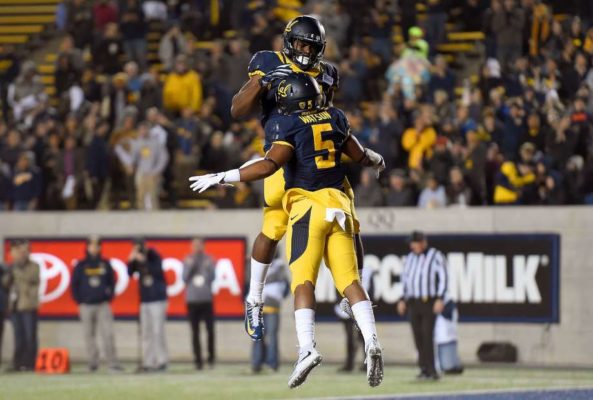 Looking for 2016 California Golden Bears predictions? Cal finished last season 8-5. They won their first five games, but then lost their next four before going 3-1 to close the year, with the only loss coming on the road against No. 11 Stanford Cardinal. Despite the stretch of losses in the middle, Cal experienced its best season in eight years last season.

Now it has to deal with the loss of Jared Goff, the No. 1 pick in the 2016 NFL Draft, courtesy of the now-Los Angeles Rams.

“Raw upside” isn’t always considered a strength, but that’s what Cal has to work with this season at quarterback.

In all honestly, “raw” may be a bit harsh of an adjective here. Cal is bringing in graduate trasfer Davis Webb from Texas Tech.

That’s a very pass-happy system, which should fit in nicely with this group.

Webb will be the starting quarterback this season, per Fox Sports’ Bruce Feldman.

This group also has a running back by committee coming back this year. In 2015-16, the Bears’ trip of Vic Enwere, Tre Watson and Khalfani Muhammad ran for a combined 1,585 yards.

Their average yards per carry was 5.6.

Those numbers obviously aren’t going to garner any individual Heisman recognition; however, it’s a solid number for a group in a pass-heavy offense.

This team can be diverse, even if most casual fans won’t recognize it.

Cal has one glaring issue on offense: The top six pass-catchers are gone. They completed 265 catches last year, and they’re gone, which means this group is going to be incredibly inexperienced in terms of receiving this upcoming season.

Sticking with the offense, this group lacks a true, consistent center. That’s a problem considering the turnover this group is seeing on offense.

Turning over to the defense, the Bears have issues galore with their linemen (on both sides, really).

Six of this group’s top eight linemen are gone and they have to find a way to make up for their top three defensive backs leaving as well, including safety Damariay Drew done for the year.

If you’re looking for a silver lining, last year’s crew was quite awful.

Time to hit the restart button in Berkeley. Starting over is never truly a good thing; however, it’s not awful to rid yourself of poor production, which is what will be happening this year.

Expect that Golden Bears to take a step back this season. That’s what happens when you lose the face of your program to the NFL draft — not to mention the No. 1 pick.

Newcomer David Webb has a chance to bring this team to the forefront of competitive conversations, but the truth is that this team has one major issue: conference competittion.

Don’t expect Cal to compete at a high level this season with other great teams in its way.

A slight step back is to be expected, but a young receiving core should grow over the next two years and help whoever is next in line at quarterback for this program.

What do you think about our 2016 California Golden Bears predictions? Please leave us a comment below telling us how you think they’ll do in 2016!